Last day of the season (for me)

It was actually the second-last day of the season and it was to be another attempt at a 6lb chub from the Thames.  Notable not for chub but for a couple encounters with pike and local types.

First swim of the day was Tumbling bay at about 13:00.   Flow was not strong at all and I used a cut down mini cage feeder withonly about 3-4g of weight on it full of the usual liquidised bread with flake on the hook.
It was a bit slow with no bites for about 20mins and then a nice big bite which I connected with.  It felt like a chub but not particularly big.  I gently pumped it up to the surface but it was acting very strangely and was darting about all over the place in an agitated manner.  As I got it under my feet and put the net in for it I could see why.  A large pike was after it.  The chub was somewhere between 2.5 and 3lb and the pike was between 15-20lb and I could clearly see it in the clear water following about a foot behind and below.  It was incredibly exciting and as I lowered the net the pike struck, nailing the chub within inches of the net.  For some reason it let go and I was able to scoop the stunned chub into the net and rescue it from certain death.  Never had a chub been so grateful to be hoisted out of its element onto dry land.  It had scales missing and a slight wound in the side but seemed to be OK as I released it 50 yards upstream.
On the walk down to the town I came across another large pike.  Or rather the remains of a large pike. On the bank was just the head of a fish of similar size to the other pike.  The rest of the creature was missing but some looked to have been chewed off.  Otters?  Russians? Poles? 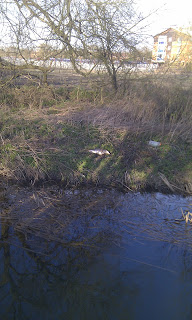 Ye olde pikes hedde
The rest of the session passed without much incident or fish.  I was fishing what was to be the last swim at about 21:00 and it was getting very cold and windy.  This swim is right behind a moderately rough estate and, coming across the footbridge was what looked like an old lady.  As she reached my bank I could see that this was a lady probably brought back from the dead.  She moved like one of the zombies in the living dead films and was clearly reeling under the weight of either mental illness, drugs or drink..  Probably all 3.  Her white hair flying in the wind, the apparition lurched closer and I was dreading being engaged in conversation or eaten.  I was looking around at my kit thinking how quick I could pack up and leave but decided to stay very still in the hope that she wouldn't see me.  And it worked.  Thank goodness.
After that close shave I decided to fuck off home and that was the end of the 2010-11 river fishing season.
Next post will be a look back at the triumphs of the season just gone.
Posted by craftmaticadjustablebed at 15:30