The river fishing season here starts on the glorious 16th of June.  This day is always hotly anticipated by UK anglers and, in my experience, never fails to disappoint.


This 2013-14 season was different and got off to a great start on June 16th.  I was due to attend the Lure Anglers Society event on the Thames at Eynsham at 9am on opening day but I could not resist nipping in to one of my favourite Thames predator venues on the way out.
Its a small weirpool which has produced some large pike and perch in previous years and is usually good for a jack or two at least.  I arrived just before 7am and by 07:05 had lost my first lure of the season on my perch outfit.  07:15 I had my first pike of the season at a nice 10lb


I was particularly pleased with this pike as it gave a great scrap on the light perch outfit and it fell for a home made lure which I call the Frankenspinner.


Its a Mepps Aglia TW spinner which allows one to change the hook easily. So I did.  I attached a small dropshot type shad with an open loop double hook.  I devised this lure for perch but have had precious few on it.  Pike seem to like it a lot though.

On to the main event.  The Lure Anglers Society (see links section for details) fish-in at Eynsham.  This is billed as 'Perch Heaven' as there are decent 3-4lb perch in this stretch of the Thames.  I have never done particularly well here and June 16th was no exception.   After extracting a 4oz mini perch on a spinner early on I blanked for the rest of the day.   It was a long day too fishing 9am-4pm. The 'perch heaven' reputation survived as 2 other lure anglers caught 3lb+ perch on the day.


In the afternoon I met up with Mukhled from Kuwait.  He's a fellow member of the Lure Anglers Society who is over studying down at Reading.  I watched this excellent Youtube video that he and a pal made about UK lure fishing (you'll probably need to turn on subtitles).
I like his attitude in coming from a country that doesn't even have any rivers to speak of and getting stuck in to the fresh water lure fishing in this country and getting some pretty good results.   I noticed he has a Reading DAA license so suggested on the LAS forum that he come along with me after Eynsham to another Thames venue which regular readers may recognise but which I will not name as it gets hammered enough without people turning up from the internet to fish it.

We made our way to the weirpool and began to work it over with lures starting at the tail end.  Mukhled was first into a fish and had something which was giving a hell of a fight.  Eventually we caught sight of a silver tail.  It was a foul-hooked fish and I immediately assumed it was a bream but it was fighting awfully hard for a snotter.  I readied the net and we both got excited as we both realised that it was in fact a rainbow trout of a decent size - a first for this venue and a UK first for Mukhled.  Sadly the hooks snagged in the net before the fish could be reversed in and the damn thing got away but we counted it anyway.

We then moved to a swim nearer the weir itself which has just been opened up for angling by the removal of a large overhanging tree sometime over the close season.  Unfortunately, over the winter, an island made of horrible snags has appeared right in the middle of this swim making it a bit challenging to fish.  I had warned Mukhled about the snags here but the place seemed to have got even worse since the previous season and we both lost loadsa lures.

I was next in with a hit on my Jennifields single colorado 1oz spinnerbait in redhead.  The pike co-operated and came in around the snags and was a decent size when we got it on the bank.


Next up was Mukhled again.  This time he received an almighty hit on his little fox jerkbait and soon had his very first 'proper' chub on the bank.  It was about 3lb-12 and had the mouth of a 5lb chub.


Last fish of the day was to Mukhled again.  The same little jerkbait accounted for this hard-fighting jack pike. 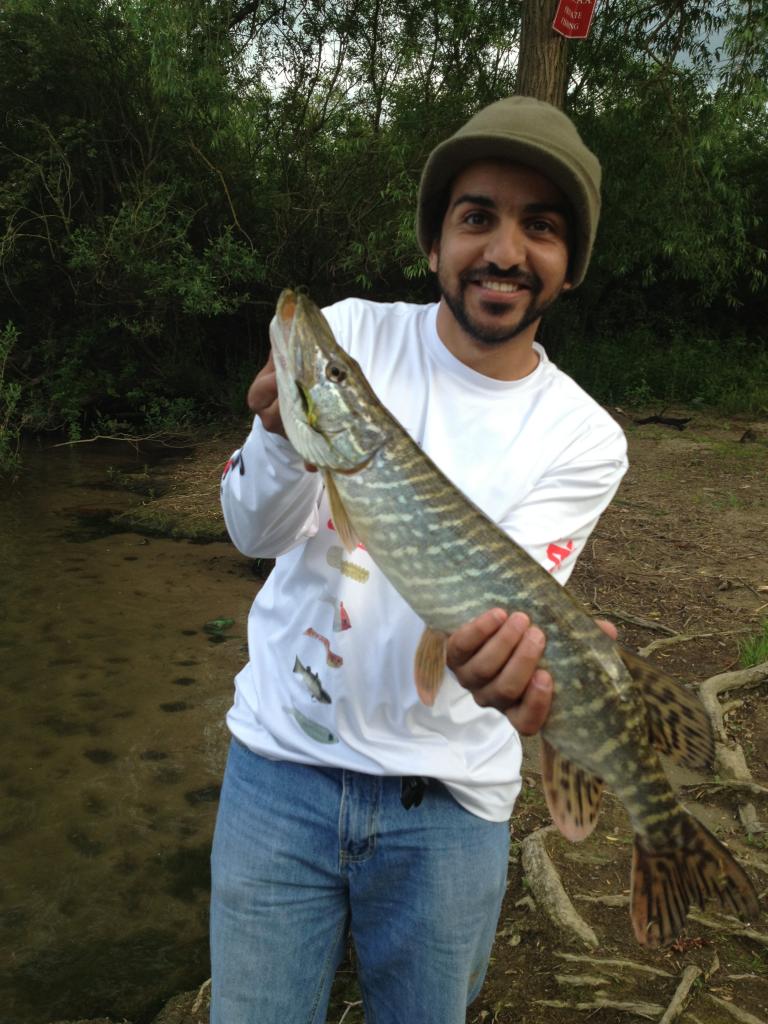 Eventually we had to leave to get him back to the station for the train home.  Not only is he a fanatical and very good lure angler but he does it all on public transport.  Respect.
All in all a great opening day with the snag swim acquiring the new name of 'The Heartbreaker' due to the terrible rate of tackle loss there.

We are now 6 weeks into the season and I have already caught more double figure river pike (3) than I caught all of last season.

I had a week off fishing on holiday in Ibiza at the beginning of July but was soon back on it the day after I got back.

Good pike number 2 came from the place where Mukhled had caught his trout.  This time I was working a floating Salmo Slider over a bank of weed that was almost to the surface and got a hit about 20 yards out.
The pike fought well as they tend to do in the summer but was soon on the surface coming to the net.  I thought I'd try and shoot a short video of it on my phone but it became apparent that the fish wasn't quite as played-out as it looked.  I'm don't think it was trying to get back at me for catching it but it launched itself right up the bank at me giving me a bit of a shock.  I'd estimate the size at 11-12lb.


The fun wasn't over then as it was still full of fight on the bank and ended up launching itself back into the river once the hooks were out.

A couple of weeks later and here we are at the end of July.  I went to the heartbreaker once again early yesterday morning and was dismayed to find 3 guys already fishing in the main part of the weir leaving only snag city for me to spin in.
Undaunted I set up the pike outfit with my 'banker' pike lure of the 10cm Salmo Slider (sinking) in Real Roach pattern.  I'd chatted to a kayak fisherman the previous week who had been all round the weir pool with a fish finder and reported that the water under the weir flow itself was up to 20' deep with the rest of the place being 6 -10 foot deep as I thought.  He said that he saw some big snags with big fish in them in the deep water so I thought I'd go shit-or-bust and try and get my Slider down amongst that lot.
It was a high risk tactic as, even if I did not immediately lose the lure in the snags, I would have to manoeuvre any hooked fish around the huge snag island immediately in front of me.

'Who dares wins Rodney' I thought as I went for a hero cast and managed to  get the slider right out into the main flow out of the weir.  There is no other lure that casts as well as a 10cm slider and nothing would have been able to go far enough to get where I wanted the lure to be.
Second hero cast and letting the lure sink down 16 feet to just above where I guessed the snags and fish would be I got a hookup at extreme range which felt like a proper big pike.  Water sprayed up as the braid line went bowstring-taught. I knew I had to 'beast' this fish back quickly to get it past the snag island before it started making runs so I pumped the fish back as fast as I could.   The fish a had a choice of running left or right and thankfully it chose left taking it clear of the snag island.  There were a few hairy moments as it snagged fast on something at one point but quickly came free.
Eventually I had it coming over the net and it looked like a mid-to-high double.  It was not a long fish but had a real barrel of a body with broad shoulders bigger than the width of the head.

As usual my scales were safely in the 'perch bag' back in the boot of the car so I guessed the weight at 16lb.
It's the biggest pike I have caught for 2 years and made me very happy indeed.

Notice how I am wearing shorts to fish.  Even though it was a warm summer morning at the tail end of the 2013 heatwave I would not recommend this.  There are millions of biting gnats by the river and they made a feast of my blood as I was fishing and my legs are throbbing now from the bites.

A few casts later I really went for it and cast my most expensive lure into the heartbreaker.  The Koppers Live Target Herring swimbait got an immediate response and I was able to land another 5-6lb jack pike without even losing any lures at all.

I'm pretty happy with the way things have gone in the first 6 weeks of the season.  I really should try and do some 'proper fishing' with bait etc but I am enjoying the sport on lures well enough so far.