Time for another tackle review.  This time we will look at the Shimano Rarenium Ci4 4000FA The most expensive reel I ever bought. 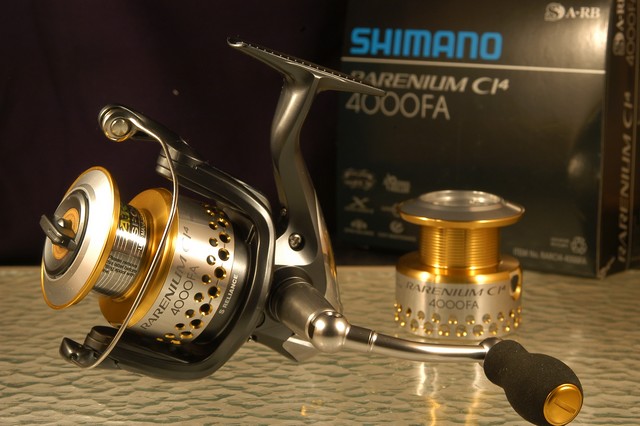 GOLD! That lovely spare spool is included in the price.

When I bought the Savage Gear Bushwhacker 10-50g 8' lure rod a couple of years ago I purchased a cheap Shimano Catana 3000 front drag reel to go with it for about £30.  This reel has been adequate and I landed my PB pike with no problems with it but the spare spool is cheap and nasty and the reel is starting to feel a bit loose after a couple seasons of heavy use.  This 'loose' feeling is particularly pronounced when the reel is under strain when using big 1oz spinnerbaits through weed and I had been thinking that it would be be nice to put a high spec reel on the bushwhacker rod instead but couldn't really justify the expense.
Lure fishing is an approach where it really does pay to have a good quality reel in your setup as the reel is under constant use casting, retrieving & snagging up.
Just in time for Christmas I had a very nice surprise when Her Majesty's Revenue and Customs sent me a cheque for £1932 because I had been overpaying being without the benefit of private healthcare that my old employer used to provide.  This free money opened up the world of more expensive reels to me.
For the first time I was able to look at the top end of the Shimano front drag fixed-spool range.  At the top we have the Stella which is overkill engineered for tuna, GTs and the like and costs £4-500.  Down a couple is the Rarenium Ci4.  At  £150-200 this is more like my price range.

I was in Somerset for Christmas and decided to drop in to the excellent Veals in Bristol to browse the reels. I looked at a few before being handed the Rarenium and was instantly hooked on the light weight,  good looks and super smooth operation.  I asked for a 3000 but got some sage advice from the shop guy to get a 4000 instead as bigger reels last longer.  This does seem to make a lot of sense as a larger fixed-spool reel will retrieve more line per turn of the handle than a smaller one so getting less mileage on the components for the same amount of spinning.  I'm guessing you probably get more surface area in the clutch and more cranking power too? 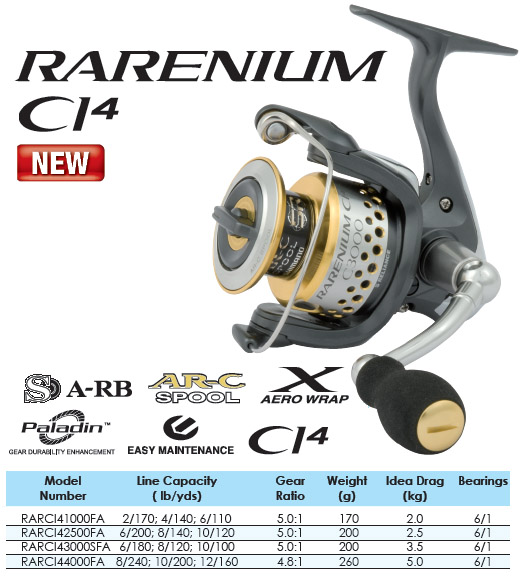 Check out the weight of these reels.  Its miraculous.  With the sexy gold & grey anodised aluminium spool removed the reels weigh almost nothing.  Instead of the traditional aluminum, the clever people at Shimano have made the reel body and rotor out of some space age carbon composite that they use for the cranks on expensive carbon racing bicycles.  The reel is supplied WITH a spare spool identical to the lovely one on the reel.  This is quite unusual for a top end Shimano reel.  I had to pay £40 once for a spare spool for the Baitrunner D I had purchased at great expense.
The reel is packed with bearings and quality gearing etc but comes out at 10g lighter than the much smaller cheapo 3000 reel it was to replace.
A bloke next to me at the counter said he had one and it was the best reel he'd ever used.  This fool was soon parted from (*gasp*) 160 of your earth pounds.

The main reason for getting this reel was to go on the bushwacker pike spinning rod and it is a brilliant reel for lure fishing.  The quality components and drag along with the light weight make it perfect for slinging larger lures all day, cranking big spinnerbaits through weed and playing the occasional pike.  The line lay is excellent.  I think Rarenium is especially good for lure fishing where lightness is required to balance short modern lightweight lure rods.
For lure fishing I have loaded it with the 30lb Sunline Super PE braid in dayglo green.  This makes the setup look very cool indeed.  Call me a tackle tart if you like but it is nice to have quality gear when lure fishing and the reel is very important.


I am unable to find any fault with this reel as you would expect for the price.  It really does feel like a cut above any other reels I have used.

I've also used the Rarenium for legering for chub and tench and the smooth drag gave line out beautifully on demand when a hard fighting tench gave me the runaround on 6lb mainline.
I'm glad I did buy the larger model as this can be used for all feeder fishing and and medium weight lures from 1/2 to 2.5 oz.  I can even see this one going to India if I get the chance to go for mahseer on lures again or it would be perfect for luring for sea bass if the opportunity arises.
The overall verdict is that this is a top quality versatile reel that is a real pleasure to use and look at.  At £160-170 this is the most expensive reel I have ever bought but it feels like it will probably last forever and having a spare spool included avoids a probable spend of another £30-40.  If you can afford to spend this much on a fishing reel then you will not go wrong with Rarenium Ci4.

I have just purchased a Rarenium 2500 to go on my perch rod, having run out of patience with the Okuma Trio 20 constantly throwing loops off the spool.
The 2500 is every bit as wonderful as the 4000 and weighs a lot less than the Okuma balancing the Dragon Guide Select perfectly.


I have now used the 4000 and 2500 twice for lure fishing for Amazon species in Guyana.  Peacock bass, catfish, payara - even an arapaima have all put massive strain on the drag and components and both reels still feel like new.  The 2500 gets hard use on UK species too.  These reels are 100% recommended and are a joy to own.