Always with me, tiny dancer in my hand

Time for another tackle review.  Lets take a critical look at my new light spinning setup.

I've been lure fishing for pike as my main angling focus for a couple of years now.  Despite using lures up to 60g in weight on a stiff spinning rod I have caught quite a few good perch accidentally on big lures.  Catching a nice perch on a pike outfit does not offer much sport as you pretty much wind them in off the reel.
I've been wanting a nice light spinning outfit to target perch with lures from 1/8 up to1/2 oz and the Lure Anglers Society Lure Fair back around Easter time was a good opportunity to see what the lure specialist tackle sellers had to offer.  The expensive trout spinning rods from Loomis etc mainly seemed too soft and expensive for my taste but The stall run by Lure-World's Artur had some very nice rods on show.
I settled on the Guide Select Dancer by Dragon of Poland.  Its 2.05m (about 6'8") long and has stated casting weight between 3-18g.  Artur even let me have it for £10 under the shop price. 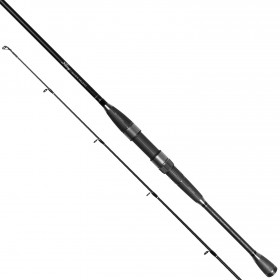 Apparently they are made in Japan to Dragon's specification.  The rod blank is beautifully slim black graphite with quality rings whipped on with a very discreet silver trim and very light.  Like the bottom end of a fly rod with a nice fuji reel seat and smart split handle which, while not cork, is actually perfect for the rod and offers a pleasant warm grip.  I decided against buying a reel at the fair and instead bought a selection of dinky lures from Sovereign and various other stalls.  I did have a look at the Okuma Trio reel and it looks very cool and feels very smooth and solid but the 30 size available was too big to balance a little rod like this.  As soon as I got home I ordered a Trio 20 as the radical metal skeleton parts matched the grey metal trims on the rod's handles. I paid £60 online somewhere.


To go on the reel I was thinking of some 15-18lb braid but eventually got suckered into Berley Nanofil in 18lb.  It has just come one the market and is similar diameter and strength to braid but the fibres are somehow bonded so its like a single shiny strand.  Apparently the smoothness makes it cast significantly further than braid and I reasoned that, with light lures, that would help get them further without the weight to help.

Now I'm not really a tackle tart but the rod and reel combination looked super cool in my mind's eye.  I couldn't wait for the reel to arrive so I stuck a 3000 size reel with 30lb braid that i use for pike on it to see what it felt like.   Being a curious sort of idiot I thought I'd give the lovely little rod a test to see how far it could bend without breaking.  I'd been very impressed when my SG Bushwhacker rod survived being bent double in an instant by a brutal mahseer attack on a plug in India and wondered how far the Dragon rod could go.  Just short of 180 degrees was the answer.  The tip section shattered into 4 pieces.  I didn't really feel angry but I did feel like a real chopper.  Now I had £100-odd quids worth of light lure fishing kit in hand or ordered but no rod.

I confessed my stupidity in an email conversation with Artur and he very kindly offered a replacement tip at only £20.  I sent the 3 broken parts back and in a few days received a new tip section.  This time in only two pieces.  The excellent professionals at the Royal Mail had snapped the parcel clean in two and crudely sellotaped it back together.  To cut a long story short I finally had all the necessary equipment to go perch fishing in mid July.  Thanks very much to Artur for being really decent.  Check out his shop http://www.lure-world.com.  I've bought lots of things there and its great for Polish soft plastic baits, jigheads and a whole range of even nicer Dragon rods for any kind of lure fishing.

Sunday I took the setup out for a third session for the last 2 hours of daylight down at my favourite big Thames weirpool and I can now give an early verdict.

Really good is the verdict.

The manufacturers blurb for the Guide Select series of rods is all about a special system to transmit more vibration from bites to the fingers.

This explains it nicely.

It's all true.
I could clearly feel the beat of the little tail on the 3" Relax kopyto rubber shad (Polish again) in the picture up the rod via the nanofil line which has zero stretch and every ping off a weed or pluck from a small perch informs the angler more directly than any rod I've ever used.  I'm not sure that rod would be great casting Ultra lite lures but it can put that shad on a 7g jighead an awful long way and is fine down to the stated 3g minimum.  I used a 3g Salmo hornet (more Polish kit!) plug last night to get a bonus chub and the lure casts OK and gives a terrific fast throb up the line.  My only reservation is the length of the rod.  Or rather the lack of it.  It is good in confined spaces but fishing as I do, predominantly from the bank, an extra foot would be a lot better when it is not possible to get right down to the water. Indeed.  With less than 7 feet of rod to control it, I was unable to prevent a chub last night getting in the roots under my feet as they are wont to do.
Fish wise I've now had a handful of perch of various sizes up to a pound or so and a 2lb chub.  In a feeding frenzy Sunday night I had jack pike hitting the little kopyto all over the place on a quick straight retrieve.  The best pike threw the hooks as I picked up the net to land it but gave me a brilliant fight on the light tackle with the perch also able to offer amusement for a change.

The reel is very nice indeed.  Its a nice size to balance the dainty rod, fitting in the palm of the hand, and looks really smart with the white nanofil on the hybrid carbon-aluminium spool.  Retrieving is silent and silky.  The clutch as good if not better than expensive Shimano reels and the larger of the jacks really gave it a workout.  Add a quality bail mechanism and radical appearance and I think the Trio is a superb reel that looks and feels expensive.  Time will tell and there's nothing like the constant casting/retrieving/snagging of  lure fishing to expose design weaknesses or cheap components in reels.

I'm not 100% sold on the Berkley Nanofil line as it is fiddly to attach to the obligatory wire trace with only a couple of knots able to stop it slipping.  It does cast and fish very well so far with the white colour aiding lure and fish handling but it has broken too easily pulling out of a snag once and will need to be inspected frequently for damage.

After another after work session last night I am growing to love this setup more and more.  It all works right and looks so fantastic that it makes you want to go fishing just to be using it.  With the breaking strain of the line and trace around half that which I use for pike I am going to lose more lures but I think it is worth it for the extra sport to be gained from the smaller species such as perch and chub.

**UPDATE**
I have now decided that I hate the Okuma Trio 20 FD.  After switching from the far-too-delicate Nanofil to normal Sunline Super PE braid I constantly get loops throwing up from down in the spool during casts which can produce some horriffic knots.  Luckily its a light outfit so the lures are too light to crack off.  This is a complete pain in the arse and other Trio owners report the same thing.  I was going to order the 2500 Rarenium today as a replacement but I have to buy tyres after finding a drillbit sticking out of my back tyre this morning.
The rod is still a joy to use however and is highly recommended.  I have handled a 10lb summer river pike on it with no problem at all so it has plenty of power.