First ever pike on a spinnerbait & she's a big-un.

Read on and I'll tell you about my new biggest pike.


While I have not been 'proper' fishing that much lately (A fruitless and expensive barbel trip to the Kennet with a gallon of maggots being a notable exception), I have been doing a fair bit of lure fishing for pike with a little success.
I have experimented with spinnerbaits in the past but have only ever had pike follow them in disbelief or strike and miss them.  A spinnerbait is a rather odd lure which consists of a rubber-skirted lead head with single hook on a wire coat hanger looking contraption with a spinner blade attached.
e.g

I have read many people sing their praises as a pike lure and was determined to give them a real try as the wire frame really does help them pull through all sorts of snags without hanging up and getting lost.  Ideal for the predator-infested snaggy Thames weirpool where I often fish and lose a lot of tackle.

I have lure-fished the weirpool a lot most weekend mornings in the last month or so and have had a low double and a few pike in the 6-8lb range on a variety of lures.  This morning I arrived around 7:15 as the sun was rising and the whole weirpool was swathed in mist.  I was the only witness to a really beautiful scene that made me glad to be out of bed and fishing/alive. 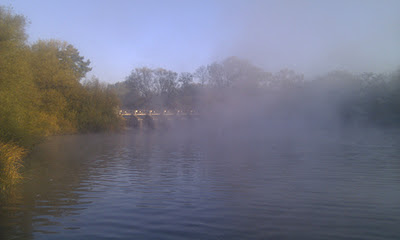 I set up and began casting my white 1oz spinnerbait with a red rubber grub on the trailer hook.  I recently bought a few of these nicely constructed pike-size lures from http://www.jennifieldstackle.co.uk/. He makes them to order at a very good price.
After a few casts I was retrieving it pretty slowly along the bed of the pool through the snags when it all went solid as if I'd hooked the bottom.  I gave a heave on the rod and the 'snag' came towards me a little bit so I began to drag out what I thought was a tree branch or similar.  Then the branch mooched slowly off to the right and I realised I was into a very large fish so I gave the rod a bang to further set the hook in.  You can tell a big pike when you feel the ponderous beat of its massive tail and I began to get excited as the 30lb power-pro braid allowed me to put some pressure on and move the fish up from the bottom away from the snags. The fish was heavy but did not fight as hard as my previous 21lb PB pike, presumably due to the lower water temperatures in mid October.   I quickly had the pike up on the surface and the swirl of its great tail in the steaming water as it powered off again and again showed that it was a seriously huge river pike.   I had it close to the net a few times but it would just turn and move slowly and inexorably away, taking line off the hard-set drag.   Eventually I the had the front 2/3rds of it in the 30" Gardner pan landing net I bought for barbel and was able to lift up and the rest folded safely into the net.  I was all alone but couldn't help informing myself out loud that 'that is f%%%ing HUGE'.
The main hook and trailer hook had both firmly set in under the chin (it must have chomped on the spinner blade part above) but I was able to remove them without too much fuss and no injury to the fish.  As I was bent down disentangling the lure from the net the pike gave a mighty thrash and launched itself just past my head.  Had it nipped me (as i believe it intended) I would have been off to hospital with a sliced up ear.
I got my fingers up in under the chin and tried to hold it at arms length in my left hand to take a photo with my phone but could not hold the weight up for many seconds because it was huge and I'm a weed.  I had no scales to weigh it unfortunately but, based on my experience of a weighed 21lb pike, I'd say this one was well over 25lb.
I talked to a Polish angler who was lure-ing the venue the previous week and he said he'd had a 27lb pike among others from there so it could well have been the same fish that I caught.   He was pretty well kitted out so I don't think he was one of the naughty eastern european guys that would have taken it home.

There's a bit of litter for scale but this next photo really shows it off nicely.  I'd say it was as big round as my leg with a nicely proportioned fat body and big broad head full of terrifying teeth.  You could stick a booted foot right in its mouth (I didn't).

Fear not gentle reader.  That blood is not coming from the fish.  I tried to grab the outside of the snout and one of those big front teeth went right through the fish's lip and into my thumb with the usual heavy blood loss consequent upon pike injury.  It was still bleeding on-and-off until about 22:00.  Leptospirosis here I come.
I hung around with the fish recovering its strength in the landing net for about 15 mins waiting for a dog walker, or my new little mate Callum to come down and get a decent photo for me but nobody came so I reluctantly said goodbye to the biggest pike I have ever seen and dropped the net allowing her to swim strongly off back to eat more fish and grow even bigger.

So my persistence with spinnerbaits paid off with the first pike to these lures being a proper monster.  I'll be back to this place with some deadbaits later in the winter when the crayfish have gone to bed.
First DHFA fishing post for quite a while but I hope you have enjoyed reading about how great I am. ;)