Hot on the heels of the last glum post I'm back from the Kennet on Reading DAA.  I have caught my first barbel from the Kennet.
After 4 blank sessions (apart from a 2lb chub) and many miles driven and walked I was not really expecting much when I arrived at Kennet Lower Benyons Sunday afternoon.  There was a match happening on the stretch I wanted to fish but I cheekily slotted in below the weir under trees where there was no peg.  Fishing my barbel rod with 14 mm pellet and pva bag and the drennan chub rod as a second with luncheon meat or pepperami was the approach.
An hour passed biteless and the match had finished so I moved up to the vacant weir pool peg (pictured) for some long range fruitless legering.
At around 6 I moved again back downstream to a point on the apex of a slight bend and cast the pellet rod nicely upstream under the big tree opposite.  After so many sessions without a bite I began thinking that the barbel here do see a lot of fishing and I should try to be more crafty in the presentation under clear(ish) low water conditions.  I attached a small backlead to pin the mainline to the bottom away from mr barbel's whiskers &, after a smoke, I set about getting the meat rod set up downstream..
About 20 mins later I was stood up trying to wrench the second rod's end tackle out of the tree opposite when I saw the tip of the pellet rod begin to slowly nod over.  I rushed across and struck and everything went solid and I could feel the barbel going up the far bank. It was obvious that it was a barbel straight away as nearly any barbel is stronger than a big chub.  The fish came back a little under pressure and I could see that it was not big.  It was the size of a big chub but the flash of the smaller golden scales as it rolled confirmed my efforts for a Kennet barbel had finally paid off.  The fish then refused to come in for some time and really battled out in the middle of the flow but never got near any snags and finally was netted.
5 1/2 lb.  Not large but a first and very welcome after a lean couple of months.  For it's size, the fight was really impressive.  This one has been hard work and catching any barbel is always exciting.
﻿ 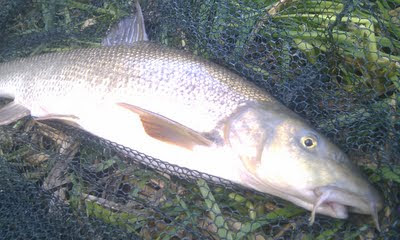 I shall be persevering with the Kennet as a chap down there the other day told me that you're just as likely to get a double as not.  That and I just love catching barbel.  Pound for pound they fight harder than any other coarse fish and the anticipation of that brutal bite really spices things up.
Posted by craftmaticadjustablebed at 15:20