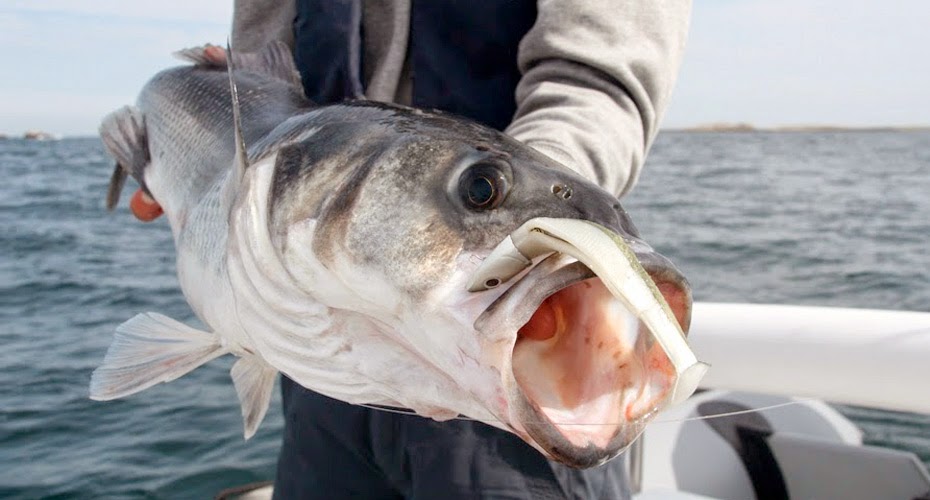 I was once tempted into the SlugGo as a weedless pike lure and it got me my first ever 20lb fish so I'm always willing to look at bass lures for their freshwater potential.  These black minnows caught my eye at the Lure Angler Society lure fair last Saturday.  They have a single worm hook attached to an articulated jighead hidden inside a custom soft shad body with a small paddle tail.  This lure is weedless because the hook point just indents the soft back.  A deep slit along the belly allows the shad to collapse when a fish bites down on it and expose the hook to nab them in the top lip.
I came away with a heavy 90mm with 2 spare light heads and light 120mm black minnow in the natural colour seen in these photos. Each setup had a spare body but only one hook.  £13 for two soft lures seems madness but they do look great in the youtube videos showing their action.  With an eye towards summer lure fishing I wanted so see if these would be a useful bait to use in the heavy weed and snags of the Thames.
I took the 120mm version with 12g 'shore' head for a test session creeping around a wild gravel pit on a windy Sunday and can report my first impressions here on DHFA. 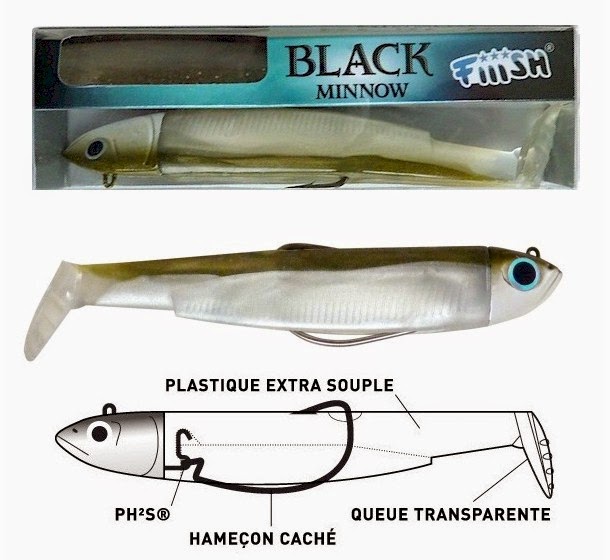 Although the small 90mm black minnow was already assembled I changed the big 'offshore' 10g head for the 5g.  Doing this will be difficult if you don't know how as is isn't obvious and involves attaching the hook inverted and then turning it over.  Watch a youtube video of someone doing it before attempting it yourself or you will probably tear the body.

It was the 120mm one with a 12g head that I took out for a test and as I swam the thing around under the rod tip in the clear water of the pit I immediately knew that this was a lure I could deal with.  The articulation allowed the tail (which looks too small) to really put some movement all through the body and gave it a more natural action than a traditional shad-on-a-jighead.  The rolling action causes lovely flashes from the sides that somehow look more soft-edged and natural than hard lures and most other softbaits.  Just like a little herring, bleak, pilchard or similar baitfish.
Casting was good news as you'd expect for a bass lure.  It casts as well as any other rubber lure I have tried.  The weedless hidden hook is good for casting too as you can really bang it out without worrying about the tail ending up around a hook when it lands. But not on land. 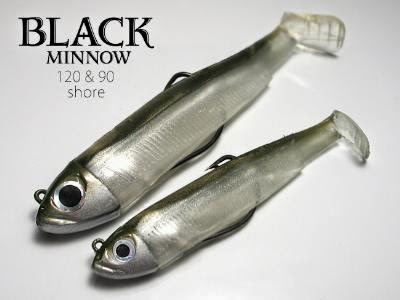 I intentionally left it to sink all the way to the bottom to see how weedless it was but the weed in the pit had not yet really got going.  There was enough muck around to test it and it really is weedless.  The only weed you get hung on it is where the nose projects beyond the ring where you attach the wire trace and that can often be removed by a good jerk on the line.  Not as weedless as a slugGo but pretty damn weedless.

I tried a few retrieves through the muck and moved along one swim.  I was trying to be stealthy after listening to a very good talk full of pike tips by Eric Edwards at the LAS lurefair the previous day about fishing swims close in first and staying hidden where possible.  After a couple chucks close in I revealed (not exposed) myself and launched the Black Minnow out about 30 yards. For a change I thought I'd swim the thing back straight away and let it find a running depth hopefully in the bottom third of the water.  After a few turns I felt something snatch it and shake its head a couple times.  This something was wound swiftly in and was revealed to be a small jack pike about 2lb nicely hooked in the top of the mouth with the minnow's body folded out of the way of the hookhold.  A single hook is safer and quicker to remove than a couple of trebles and the mini pike shot off like a rocket when it regained its element moments after being removed from it.  The soft body only had a few nicks in it from the jack so back out it went

A few more swims along and out of the wind I was casting from behind a tree where I could peep out through my polarised sunglasses and hopefully see fish following.  And follow they did.  A jack of about 6lb and a smaller one both followed the minnow all the way in several times but just sat and looked at it from about a foot away when I dangled it or dropped it to the deck.  They did the same to a shallow salmo perch 12 and a slider so I don't think they were hungry.

DHFA first impressions of the Fiiish Black Minnow are very positive and this will be a lure I will take anywhere. For sneaking around chucking into swims with unseen weed and snags it is as safe as any lure.   The sexy action and very natural appearance make it a clear water lure that I can have confidence in.  I'm really looking forward to June 16th to throw this into my favourite snaggy/weedy weirpools.  It is expensive for a soft lure but I am hoping that the weedless design also means that I will not lose too many in snags.

After a few sessions with the 120 and 90mm Black Minnows I am even more enthusiastic about these lures.  Pike really like the 120 and I've had a big perch bite a lump out of it right in front of me.  The Black Minnow 90 is now my #1 go-to perch lure.  I've had hundreds of perch up to 3lb 2 on the khaki model.  If I'm fishing a swim where I don't know what snags/fish are in there its the first lure to go on as its unlikely to snag up and I have the utmost confidence that, if a perch is there, it will take the lure.

At the pit I've had one of the better pike from there on the 120.  A really exciting catch as I was at a deep corner of the pit casting around the corner to the edge of a tree recently fallen in.  I lobbed the perfect cast and the black minnow plopped into the water right on the tree and dropped tail-wagging down to where I hoped a predator would be hiding in the shadow.  Keeping the line tight to the lure as it fell I had no trouble detecting the hit as the shad was nailed by a pike several feet from bottom.

I'd estimate it maybe 9lb but it gave a lively fight and was frisky on the bank too.

The black minnow's swimming action and movement really do seem to stimulate predatory fish in to following and striking.  It's a brilliant search lure to plumb a swim and find out what's there without hanging up - in the knowledge that you will probably draw a strike from any predator present.

A shallower running jig head would be the perfect improvement on Black Minnow for me and it appears that such a thing exists or has existed recently.

The attachment loop is right at the front so it ought to be more weedless than the 'shore' heads I use.  I cannot, however,  locate one of these things for sale.  If anybody can find me some please put a comment up.