Three months later I've finally got something to write about.  Most anglers have targets in terms of  sizes of different fish that they wish to achieve but it is important to enjoy the fishing rather than obsess about these targets.  Three big ones for me that I had yet to realise were the 2lb roach, 3lb perch and 6lb chub.  Fish larger than these live in the rivers around where I live in Oxford.  In about 7 hours of fishing in the last 8 days I have just beaten 2 of these and am very happy indeed.

The fishing in February has been difficult with the ground sodden everywhere since last summer and every fall of rain putting the rivers up quickly.  I've mainly been putting in short lure sessions on the few bits of river where there is a slack out of the main flow or quick chub sessions when/where the flow permits it.
Last Saturday I had a short lure session in the last hour and a half of daylight at the place I wrote about in the last post.   The action is very slow there now with occasional blanks and odd jack pike.

I was working the 2.5 inch kopyto shad in red and white slowly along the bottom when it all went solid.  For a change it wasn't a snag and the familiar head shaking and a weighty feeling told me it was a decent perch.  Even big perch are not great fighters and I soon had it up to the surface where I beheld a really big looking perch.  Into the net and quickly out and onto the 'Flyweight' scales it went.  The needle went round to something silly like 5lb and i realised I needed to zero the scales for my wet net.  Tricky to do with one hand and and the other thumb jammed in the mouth of a big perch.  I finally got it and dropped the perch back in the net and it went to 3lb 2oz.  The fish had been out of the water for a while now and it was almost dark.  Nobody was about at all so, rather than take a picture of the fish lying on freezing brick paving, I decided to return it with no photo.  I re-weighed the net and got 2oz -making my perch 3lb exactly.  Sadly no photographic proof so this one has the D Heaps 'If you don't believe me - f%ck off' seal of authenticity.

End of season February and March is my favourite time for chub fishing.  The greedy chub are in their best condition as they feed up all winter to build themselves up to withstand the rigours of spawning in the spring and the weeds are dead in the water and on the bank.  Due to the awful flooding and snowmelt etc I've managed precious few hours fishing for chub this winter with only a 4lb fish from the Thames to show for it.  Last weekend I went to have a look at the Cherwell but found it well over its banks and the carpark under at  least 12 inches of water.  A week without rain and frequent checks on the excellent Environment agency river levels website Environment Agency river levels - Thrupp showed the river falling nicely to a fishable level and an inpection in person yesterday revealed a small chub river looking perfect for fishing with a strong flow but a lovely green tint to the colour.   See the photo at the top.
I had things to do today so was only able to do a short session into the dark this evening and I arrived at the Cherwell at around 15:30 armed with the Drennan 1.25lb TC chub rod and some liquidised bread with Warburton's blue for the hook.  Bread fishing is cheap and very effective in late season everywhere chub are to be found.  This bit of Cherwell has brought me a few 5lb+ chub in years past including my PB of 5lb 14 but it only usually produces one or two fish a session and that is usually fishing 4 or 5 different swims.  So relatively hard work for a few fish but they are usually big.
I looked at a few potential swims before deciding start off in the one in the picture at the top of his article.  The river here is mainly too turbulent to fish along most of the stretch but this spot had a lovely smooth glide straight into a large snag formed by a tree in the water on the near bank.  It looked perfect.  I set up well upstream of the tree intending to fish about 3/4 of the way into the snag with liquidised bread in a cage swimfeeder.  The idea being that the trail of bread particles would draw the chub far enough up out of the snag for me to have a chance of stopping a big one before it got back into the sunken tree.
End tackle is simple with a Kamasan B611 spade end size 10 hook whipped to a 30 inch hooklength of Preston powerline 5lb-14.  Small Drennan cage feeder with added weight and a Drennan quick change stop bead thing.
I fished bread flake on the hook attached by a new method I read about on Jeff Hatt's blog (see links) where you compress, fold and hook the sliced bread and it swells up in the water hiding the hook.
Prior to attaching a hooklength I like to put 3 feeders of bread into the swim to get the fish coming out of the snag for a look.   After a lovely hot cup of tea (essential to survive fishing at this time of year.) I was ready to cast in with a baited hook and landed it right where i wanted about 4 or 5 yards short of the snag.  Nothing happened for about 15 minutes so I reloaded the feeder and rebaited the hook and in again.  Again a 15 minute wait brought not a single indication of fish present.  Normally it is not necessary to wait more than 30 minutes in a place like this and if nothing happens in that time it is best to go looking for the fish elsewhere.
I was thinking about a move when a light single 'knock' on the quiver tip betrayed the presence of something alive in the swim.  about 10 seconds later the proper bite came and the tip went steadily over with me striking about a second in.

The rod continued to bend right round as a heavy fish went for the snag with the dogged thumping fight of a decent chub.  The Drennan series 7 1.25lb TC rod is great for small river chubbing and I was able to slow the fish to a crawl in a couple of yards and just hold it for a while before beginning to slowly pump line back onto the reel.  The fish grudgingly came back with a not particularly strong fight but it felt like a 5lb fish at least.  When it finally broke surface it looked like a good 5.5 lb but when it slid into the net and I struggled to lift it clear of the water I thought I could be be on a personal best chub - maybe even the magic 6lb.
I had it in and out of the water a couple times as I photographed it with my phone and then unclipped the quick-release landing net head and weighed it on the new Reuben Heaton Flyweight scales I'd recently bought to replace some shite unreliable digital scales that had failed me for the last time.  The needle went round to an astonishing 6lb 10.  I did it again for the same weight and then weighed the net again after I'd released the fish getting 1oz so giving me an enormous 6lb 9oz personal best chub and an erection.
The hook was right back in the throat so it had really munched the bread back confidently.  I suspect that this stretch of river does not get fished very much at all and its nice getting huge fish like this feeding well in daylight.
I went on to fish 3 more swims catching a decent 3lb-looking chub before calling it a day just after 18:30 in the dark.

Getting 2 big target fish in a week has been wonderful especially as conditions have been difficult all winter.  The trouble is with targets is that you have to re-set them once you've done them.  Perch target will be a 4lb one now.  4 and even 5lb perch are in the Thames around here.  I met a little 10 year old lad with his young dad a couple weeks ago and they showed me a picture of a perch the boy had caught down town in Oxford city centre which they said was 5lb-odd and was definitely a huge one.  I've actively targeted perch a lot this season and caught a lot. While the really big ones elude me I know they are there and would be disappointed not to get a 4lb one some day.
As regards the chub. 6lb-9 is a very large fish even for round here and I will have to put in a lot of hours hard chubbing in the cold ever to beat that.  A 7lb+  crayfish fed chub is possible from the Thames or Cherwell but still very rare.

If you're into chub fishing then I can recommend 2 excellent books on the subject by two very good anglers and writers.

Peter Stone, 'the gentleman of angling' was a fishing legend who lived in Wolvercote and must have fished some of the same places I do.   There is a memorial plaque for him from the barbel society on the bridge between Wolvercote and Godstow. 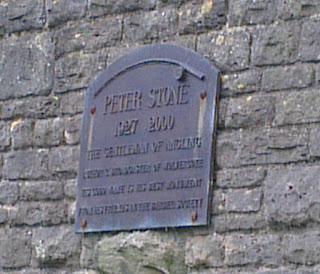